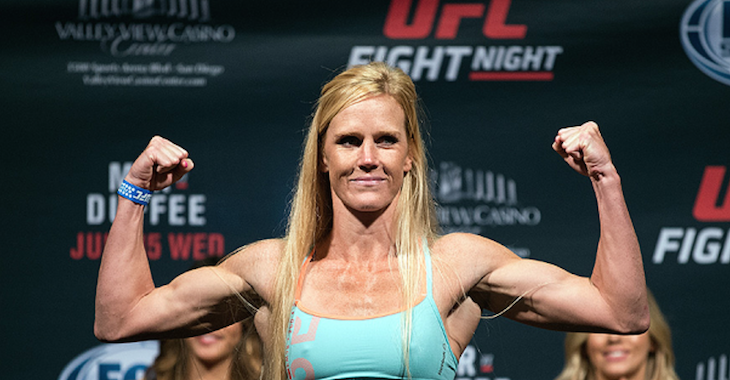 Ronda Rousey has a reputation for decimating opponents inside the Octagon, largely in part to her incredible mental fortitude.

In the past, Rousey has explained that her mother taught her from a young age that no one has the right to defeat her in competition.

Despite all of that, Holly Holm seems unfazed by Rousey stating that she plans to out-box Holm, a former pro boxing champion.

“I don’t know how much she really wants to box,” Holm said. “And how much she just wants to play little mind games and the psychology of making people do what she wants to do.”

“I don’t want to go into the fight thinking, ‘She’s going to come out with this, so I’m going to throw this,’ A fight is unpredictable. That’s why people love to watch fights. You don’t know what’s going to happen. So, I want to go in with kind of an open-ended plan and be able to adjust along the way.”

Rousey has also stated previously that she believes Holm wouldn’t be able to handle the pressure of being the UFC champion if she were to win their UFC 193 fight in Australia.

UFC 193 goes down November 14th from the Etihad Stadium in Melbourne Australia. You can see the extended preview for the bout by clicking THIS LINK.

Do you think Rousey will be able to out-box Holm? Sound off below PENN Nation!