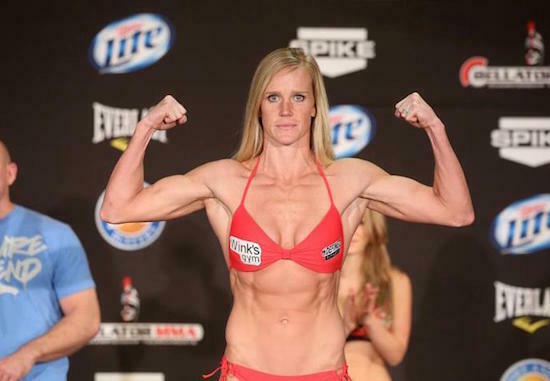 “Last year I had six fights in 12 months. And this year, one. A broken arm and a herniated disk. So what can you do? I’ve gone 16 years without an injury so I guess I really can’t complain. I’m just trying to heal, not get too frustrated. But I’ve been a very active fighter. There was a lot of anticipation for that first fight in the UFC, so it was a huge letdown, especially because I was already three-quarters of the way through a full training camp and I’d already put so much hard work in. It was very much a letdown. But I’m getting over it. I’m ready to just have a fight again. [Rousey] has obviously blown through everybody that she’s fought in the UFC. There’s no doubt that she is the toughest girl out there. But everybody’s beatable. I want to be able to have that opportunity to get in there with her, just in a good sportsman way. If you’re not wanting to get in there and fight the best or get the belt or be the best, then you probably shouldn’t really be doing this at all.”

Can she get there?