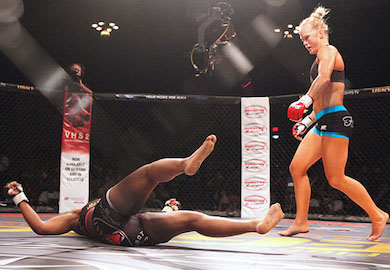 Newly signed UFC women’s bantamweight Holly Holm spoke with ESPN to give her thoughts on what is wrong with the Pound 4 Pound ladder, and why women seem to get snubbed from it time and time again, mainly Ronda Rousey.

“I know there is a certain strength in men that is a little different in females but personally I would like to be on a pound-for-pound list that’s mixed,” said Holm. “It’s a compliment. Heck yeah, let’s do it. In 2008, I was nominated for an ESPY for best fighter of the year. I knew I wasn’t going to win. I was up against Floyd Mayweather, Kelly Pavlik and Georges St-Pierre, but I’ll tell you, it was more of an honor for me to be nominated best fighter of the year than female athlete of the year because I was grouped in with those guys.”

These comments are similar to ones made by UFC President Dana White when he said if Rousey was a male, she would be at the top of the Pound For Pound Ladder.

What do you think PENNation? Are women snubbed from the UFC’s Pound For Pound ladder? Sound off in the comments section.