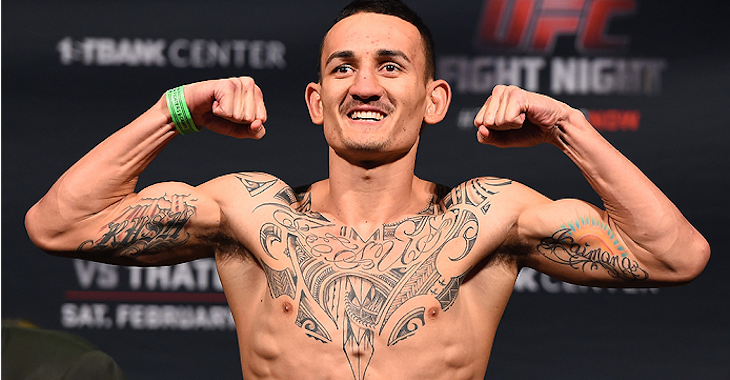 Featherweight contender Max Holloway (12-3 MMA) is the only UFC figther thus far to take “The Notorious” Conor McGregor to a decision inside of the octagon and he would give anything for a rematch:

“I’d do anything for that rematch,” Holloway told MMAjunkie. “It’s going to happen. McGregor is a cool dude. He has nothing but respect for me. Every time someone brings up my name in interviews, he talks some good stuff. I think I earned his respect.”

Holloway’s position as the only man who McGregor failed to finish in UFC competition is one angle for a rematch. However, Holloway’s greatest incentive is the opportunity to compete at full strength. McGregor may have endured a knee injury half way through their fight, but Holloway was also injured in the contest. He said he suffered a sprained ankle in the opening seconds of the fight and was forced to readjust for nearly 15 minutes.

“Everyone always says this and that about the first fight, but he cried about an injury that he had at the end of the second round,” Holloway said. “I didn’t cry about no injury. I had an injury in the first 30 seconds of the fight and I fought him all the way to a decision. He had two rounds to finish me and he couldn’t get it done.”

Since losing to McGregor in August of 2013, Holloway has since gone 5-0 with four stoppage victories to his credit.

The surging Hawaiian will meet #3 ranked Cub Swanson on the main card of UFC on FOX 15, which goes down Saturday April 18 in Newark, New Jersey.

A victory over Cub could propel Holloway in to his desired rematch with McGregor.

Would you like to see this rematch in the near future? Sound off Penn Nation!