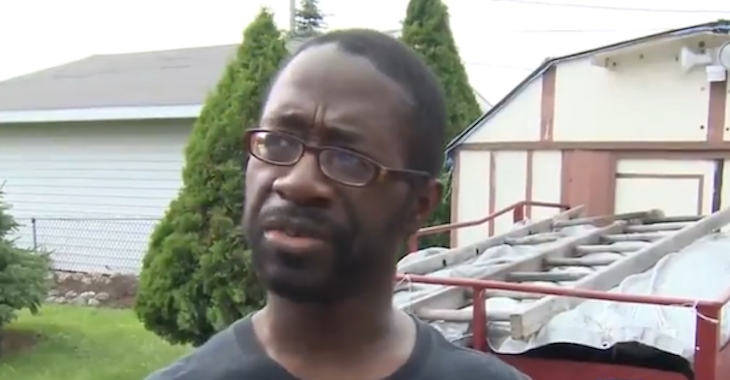 Let me set the scene for you. It’s late, on a Friday night. You’re in your house, minding your own business, sitting in your basement. Suddenly, you hear a sound coming from upstairs. A sound that forces you to investigate. You walk up your stairs and take a look around. Right there, sticking halfway out of a window, is a man you’ve never seen before. The mystery man doesn’t threaten you, but instead asks if he can cut your grass. What would you do?

That’s what happened to Jerril Grover, a man who lives in Kenosha, Wis. Grover talked to the local news, 12 WISN, about the incident and what took place upon discovering the intruder.

“For some reason, my adrenaline kicked into action right there, and I knocked him out of the window, and I took a vase and smashed him on the head.”

“Took it (the hose) and put it around him like this here first, and once I wrapped this it kind of cut off his circulation.”

“The first thing he said was, ‘I want to cut your grass.’ I said, ‘Uh huh, something about to happen right here.’”

The police came and took the burglar away. Grover says he just hopes the young man gets the help he needs. Would you jump into action that fast?