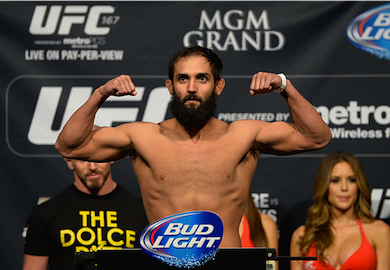 “I’d love to fight at 185. Not having to cut down to 170? Are you kidding me? I walk around at 215, 220. That’s an average cut for a 185-pounder. That’s probably what the 185ers are walking around at. So the only thing that hurts me is that I’m 5-foot-9. I still thought about it, and I talked to my coaches, too. It doesn’t hurt me because everybody that I fight is 6-, 6-foot-2 with a 75-, 76-inch reach. They’re all tall guys, and I have to get inside of them. Then you start thinking of some of the great fighters. Mike Tyson, he’s one of them. He fought everybody that was way bigger than him. The only thing I would have to do is get some strength. I’m very strong at 215, but I have to lose some muscle in camp to get down to 170.”

In a recent interview with MMAJunkie.com, this weekend’s UFC 171 headliner, Johny Hendricks, discussed the future and possibly a second division to test himself in.

Think he could make an impact at middleweight?