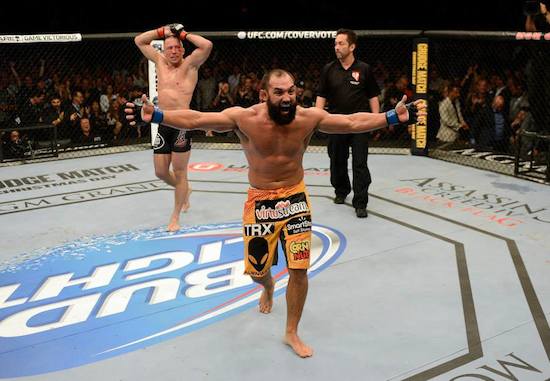 Johny Hendricks is currently gearing up for his UFC 181 rematch against Robbie Lawler this coming Saturday.

Since capturing the vacant welterweight championship nearly a year ago, Hendricks hasn’t fought in the UFC, whereas Robbie Lawler has fought twice, going 2-0 in the past 9 months.

Hendricks spoke to MMAJunkie about the rematch, and what it’s like being inactive after winning the championship.

“I feel being inactive doesn’t bother me. You have to train hard and learn how to compete with layoffs. I would like to be able to finish Robbie this time. (The first fight) was a close fight and I was injured a little bit, but I think with this one is going to be different.”

“It’s humbling not being able to fight. I regained that hunger and desire. It benefited me to have some time off and let the body heal, to recovery from a lot of injuries. It’s also the mental side of it and the family side of it. I get to spend more time with the wife and the kids.”

“All that stuff plays a huge factor in making a comeback. I’m looking at it all as a positive.”

Do you see Hendricks inactivity being a factor in this highly anticipated rematch? Sound off in the comments section.