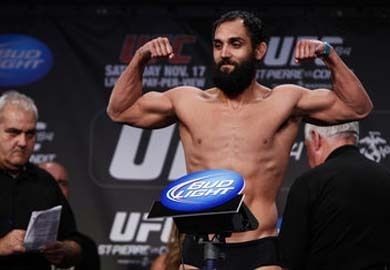 “Well I’m not as good as Anderson, but I believe I have what it takes to beat GSP. I’m a wrestler, I’ve been wrestling since I was five. And, they say that’s what GSP is the strongest at and also I have knockout power. I can lay anybody out at any given moment. The only thing is that sometimes I like to fight, just because I like to fight. You know what I mean? I don’t like to end it fast. And sometimes I go in there and I know I have to make a statement and I know I have to do something to put myself above everybody else and that’s sort of what happened with Kampmann. No. No, I don’t [think GSP can take me down]. I’ve wrestled all my life and if I really wanted to I could go into a fight and take him down. I just haven’t had the thrill of wanting to take somebody down. For some reason, just hitting someone in the face is a lot more exciting to me, and also to the crowd.”