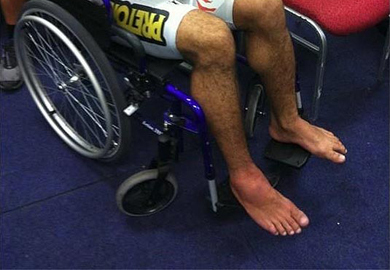 He went to the fight healthy and was kicking me and I checked all his kicks with my knee and he broke his foot. That’s why I wanted everybody to reach out to me because he didn’t enter the fight with a broken foot. He got injured during the fight.

It’s karma. He intentionally breaks people’s foot, intentional breaks people’s arms, intentional. He knows that people tap but after people tap, he still pulls and is breaking and ripping their legs and their arms out and it’s unreal. I don’t understand. If you look at most of his fights in Abu Dhabi, the guys after they tap, he’s still breaking and ripping their legs apart. And now, I believe it’s karma for all the stuff he’s done in the past, coming back to him.”

UFC middleweight fighter, Hector Lombard, tells MMAMania.com that he believe Palhares was on the wrong end of a karma circle when he suffered a broken foot during their fight “down under”.