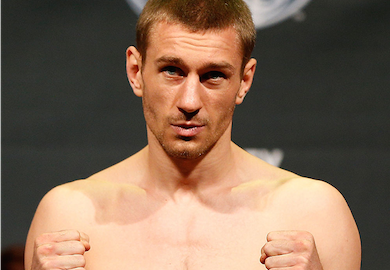 “First of all I want to say that I was very surprised to hear that I failed a drug test. I’m very careful what I put into my body and in no means have I used any banned substance.

“I’m very angry that something like this came up especially the way they handled the whole testing in Brazil was far from being professional. It was clear that the procedure was unreliable and strange to say the least and this should be a big concern for fighters and the UFC.

“I know that mistakes have been made by the commission which they even admitted. So I want to give my side of the story so people have a better understanding how it was all handled.

“Right after my fight when I walked back to my dressing room a very loud person who couldn’t identify himself was shooting: “Doping! Doping!” and speaking in broken English. My coaches tried to figure out what the man wanted and finally it was clear that I needed to be escorted to a room where I was being tested, so like always I complied and gave my blood.

“At that moment I was badly injured and was waiting for transportation to the hospital. All of a sudden one of the people that tested me at the event drove all the way to the hospital telling us that something went wrong with the testing but at that time I was in extreme pain as the medical team was treating my broken jaw.

“The man understood and saw that it wasn’t the best moment to do a second test as I was being injected with some painkillers. So the man apologized for the mistake and just left. During that moment I didn’t make anything out of this strange situation as I know I’m a clean fighter who always have been professional with my career and never used any steroids or banned substance for that matter.

“But now the whole ordeal gives a different perspective and I feel that those mistakes they are referring to might be the reason of the failed test. I’m wondering what kind of mistakes can you make if they already took my blood right after the fight? The first thing that comes to mind is that the way they collected the samples have been done wrong or maybe misfiled.

“The whole handling from the moment a unknown guy screaming ‘Doping! Doping!’ to the whole testing procedure was unprofessional. Someone coming to the hospital while I was in treatment is just crazy if you ask me.

“I hope that there is a way to appeal this as my career is now in serious danger and my name has been tainted. I believe that the whole testing procedure is unreliable and this could be a serious matter for future events that will be held in Brazil.

“I restate my innocence in this matter and I will fight to make this right. I know for a fact that mistakes have been made.”

UFC lightweight fighter Piotr Hallman may have suffered a loss in his last bout, but what came next seems like more of a fight, than the fifteen-minutes just spent against Gleison Tibau.