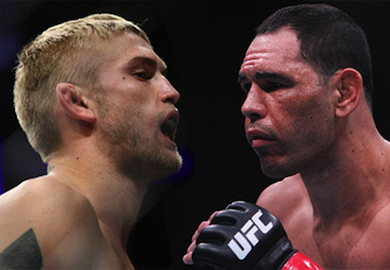 It has been just over a month since Alexander Gustafsson left it all in the octagon in a losing effort against the UFC Light Heavyweight Champion Jon Jones. Since then, the media and fans alike have been clamoring for either a rematch or his next bout to be announced.

Nogueira’s last outing in the octagon saw him defeat elite UFC veteran Rashad Evans in decisive fashion. In the days leading up to the fight, a majority of the viewers thought Evans’ octagon wrestling would cancel out Nogueira’s BJJ. That statement was never really tested as the majority of the bout remained on the feet. Nogueira outstruck Evans and was awarded the unanimous decision victory. In his previous fight, “Lil Nog” utilized his striking and defeated Tito Ortiz by way of TKO in the very first round.

This will be a good test for Gustafsson’s ground game and Lil Nog’s striking.

Also announced for the March 8th card was a rematch between Melvin Guillard and Ross Pearson.

Considering the fact that Pearson suffered a bad cut on his forehead from the second knee, the bout was ruled a no contest.