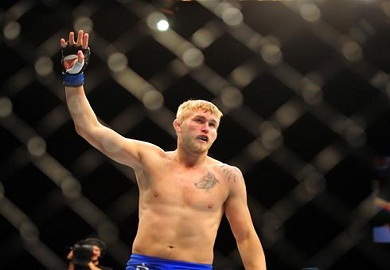 Following a tense week of injury news for UFC on FUEL TV 9 headliner, Alexander ‘The Mauler’ Gustafsson, the Swedish MMA Federation has officially barred him from competing, following a bad cut sustained in training. (via MMAFighting.com)

The Swede was seeking his second UFC fight in his home country of Sweden against Gegard Mousasi, who was making his UFC debut. Now, just four days before the fight, there is a hole in the most important fight of the card. What makes matters worse is a co-main event that isn’t suitable to move up and serve as the final bout of the evening as Ross Pearson battles Ryan Couture. Not to take anything away from either fighter, but this fight simply isn’t main event material in that it won’t draw nearly half the audience that a fight with Gustafsson would.

What makes this whole situation all the more strange is a possible replacement of Gustafsson with Wanderlei Silva. Silva had reported that the UFC contacted him to fill for Gustafsson on April 1st, only to announce that it was an elaborate April Fool’s joke the next day. Now, with some tension built between Silva and Mousasi, (as Mousasi doesn’t know who he will fight, if anyone at all) this fight could come to fruition with some organic hype behind it, even with such notice.

Now the card sits with no confirmed main event as the April 6th date approaches.