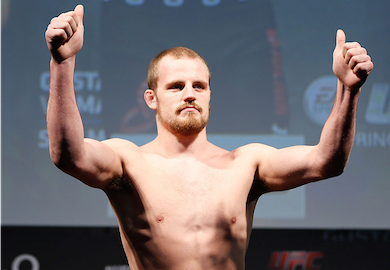 Iceland’s Gunnar Nelson improved his record to a perfect 12-0 by submitting Omari Akhmedov with a first-round guillotine choke at March’s ‘UFC Fight Night 37’ in London. The stoppage victory earned Gunnar a “Performance of the Night” bonus, worth a cool $50k.

Meanwhile, Ryan LaFlare was most recently seen in action at this month’s ‘UFC Fight Night 39’ event in Abu Dhabi, where he scored a unanimous decision win over John Howard. LaFlare entered the UFC sporting a 7-0 record, with all seven of his wins coming by form of stoppage. However, since debuting with Zuffa, all four of Ryan’s octagon victories have come by way of judges decision.

The ‘UFC Fight Night’ event in Dublin takes place on July 19. The event is expected to air on the UFC’s new digital network “Fight Pass.”