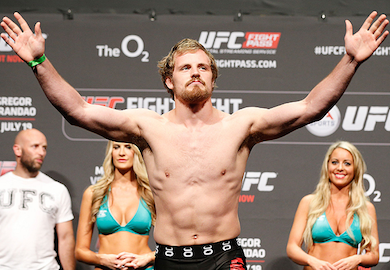 The Ultimate Fighting Championship has confirmed that top 15 welterweight contenders Gunnar Nelson and Rick Story will collide in the five round main event of UFC FIGHT NIGHT STOCKHOLM on October 4. The entire card will stream live and on-demand on UFCFIGHTPASS.com, the UFC’s digital streaming service, to subscribers in 167 countries and counting.

The main event pits Iceland’s No.12 ranked Gunnar Nelson, 14-0-1 in MMA and 4-0 in the UFC, against No.15 ranked American Rick “The Horror” Story, a five-year UFC veteran who’s 14-8 MMA record includes a 2010 victory of reigning UFC champion Johny Hendricks.

Nelson said: “To headline a card in Sweden is huge for me. They love my kind of style of fighting and I am of course Scandinavian so we have a good connection. I am honored to fight in Sweden and to headline this card.

“Rick Story has fought many of the best fighters. He beat the current champion in Johny Hendricks, he is very experienced and is a very good wrestler. He is a tough opponent and I am happy to be fighting him. Now I will head straight into training. I plan to go to Las Vegas to train with Conor McGregor and to help him prepare for his fight, and then I will most likely go to Sweden from there.”

Story said: “Oh man this is a really exciting match up! Stylistically it’s going to be great because Gunnar is a grappler and an attacker, when it comes to fighting you can’t ask for more than someone who comes at you. As soon as I found out I started to watch his fights on UFC FIGHT PASS.

“I have fought in Germany before but it will be my first time in Stockholm so I am looking forward to seeing the city. My schedule now will be to pack up, leave Vancouver, Washington where I am at the moment and head down to Arizona to the MMA Lab to start training. I’m really excited for this fight.”