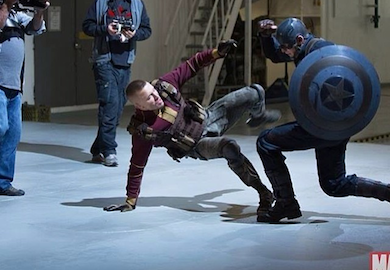 Brian O’Shea, CEO of The Exchange, has announced a deal to sell the big budget reboot of the 1989 classic KICKBOXER. The Exchange will begin selling this action packed remake at this year Cannes market.

The film will also be introducing Alain Moussi as its lead. Mr. Moussi is a world-renowned stunt man / martial artists, performing in such films as (X-MEN: DAYS OF FUTURE PAST, IMMORTALS, PACIFIC RIM, WHITEHOUSE DOWN). “Alain is a star and will be an amazing leading man,” said Filed “Like Vin in RIDDICK, Alain will make this movie very special and this KICKBOXER reboot will be the start of an amazing franchise”.

Additional cast will be announced shortly.

David and Kurt Sloan are the descendants of a well-known Venice, California dynasty of champions. Both are top-notch fighters and athletes in the prime of their lives. When David wins the Karate World Championship, a promoter lures him to Hong Kong despite Kurt’s protests that the man is a crook. Not soon after, Kurt receives a letter from David and heads to Thailand to meet him. When he arrives, he discovers his brother is dead. The man responsible is the viscous Tong Po. Desperate to seek revenge, Kurt turns to Xian Chow, his brother’s former mentor. To defeat the man who killed his brother, Kurt must look within himself to find the strength and courage of a champion.

The film is also produced by Dimitri Logothetis and Nick Celozzi. Mike Weber and Peter Meyer will executive produce as well as Brian O’Shea, Jeff Bowler and Nat McCormick for the Exchange.

“I am very excited about KICKBOXER being in Cannes” said O’Shea, “we have a visionary director, a strong Hollywood producer, great cast and an action packed script based on a well known property – what more can you ask for?”