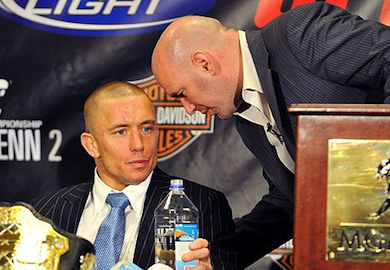 We left the GSP hysteria back in 2013 where the former UFC welterweight champ left his UFC world title behind for a shot at taking care of his compounding personal affairs.

But now Georges is spreading a tale through the media about how his former employer (UFC) and how they actually had the nerve to take his belt from him while his back was turned at UFC 167.

Here’s what GSP told the media recently about this situation:

“I’m taking my shower after the fight. I’m in my suit and tie, after that, they passed by, took the belt and they left with it, without even telling me. I have the belts I won before, but I don’t have the one from my last fight.”