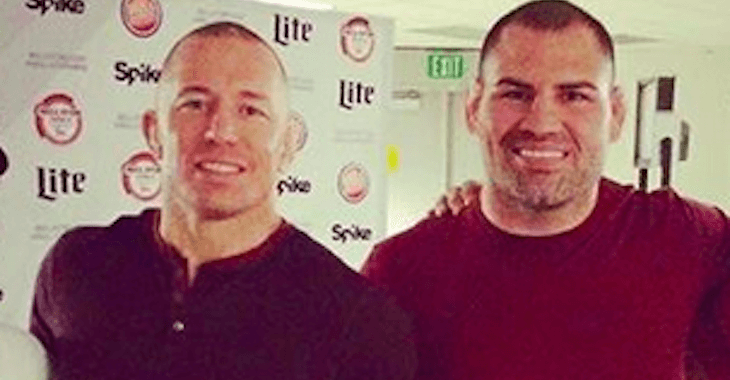 Georges St. Pierre stepped down as champion and away from the octagon to help clean the sport of mixed martial arts and it looks like it has paid off. The United States Anti-Doping Agency and the Ultimate Fighting Championship paired up to help clean the sport and it could have been the first step to seeing St. Pierre back in the octagon. In the meantime, the former champion has been keeping fresh in the gym by helping his training partners prepare for THEIR biggest fights of their lives.

This past Saturday, Francis Carmont, long time training partner of GSP, duked it out with some of Bellator’s best for his opportunity to fight for the light heavyweight championship. Carmont picked up a big win in the reserve bout and “King Mo’s” injury landed Carmont a spot in the finals. Phil Davis made quick work of Carmont, though, and he came up short in winning the one-night-tournament.

Still, Carmont impressed in his two appearances and his stock undoubtedly rose. Watch GSP and Carmont hangout behind the scenes at “DYNAMITE”!

Always good to spend some time with team #Affliction! (Repost via @afflictionclothing)

First win of the night! Hopefully we’ll have the chance to get a second one.

When do you think we will see GSP back in the octagon? Will he ever even make a return? Share your thoughts in the comment section below!