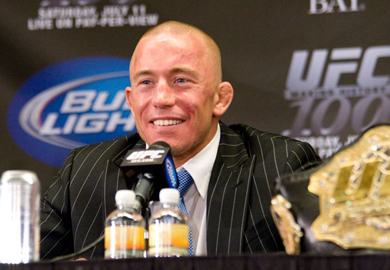 “I hate that. They talk to me about the next fight and I’m not there. Like I’m supposed to win easy, like it’s a joke. Carlos Condit is a dangerous guy. I always respect my opponent. My life is on the line. Name the top guy and they’ve said they want to fight me. They want to make the money. It’s normal. I understand why they want to fight me. I don’t know. I haven’t thought about it. I know he’s a big guy. I have to sit down and analyze it.”

In an interview with the NY Post, UFC welterweight champion, GSP says he may not be interested in a superfight with middleweight champion Anderson Silva.