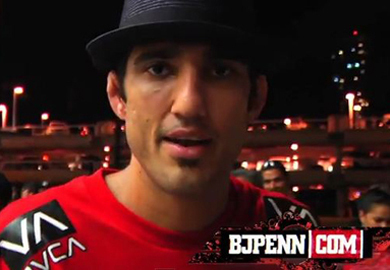 Saturday night, the U.K. invaded the U.S. at Global Warrior Challenge’s “British Invasion” PPV, which took place at the Sprint Center in Kansas City, Missouri. It was an entertaining night of fights that saw everything from slick submissions, to comeback wins, to vicious knockouts, to hard=fought decisions. In short, it was what every fight fan looks for in an MMA card: action-packed.

In the end, it was a successful night for the U.K. competitors, as they took the majority of the bouts. However, all the fighters laid it all on the line, and left their best in the cage, regardless of the outcome.

Here are some highlights of the card:

– Max “Power” Nunes (11-0) kept his record perfect with a 1st-round drubbing of Justin Davis. All 11 of the youngster’s wins have come via stoppage…definitely a name to keep an eye on.
– Jack Marshman moved his record to 12-1 with a brutal first-round TKO of Wayne Cole. Another Brit to watch out for.
– Dayman Lake was getting blasted by Jake Heun, but survived and took his opponent’s back, grabbing the RNC victory. Great come-from-behind submission.
– LC Davis earned his 20th career MMA victory and fourth-straight win in a dominating decision over England’s James Saville…where does the KC native go from here?
– British strongman champion Oli Thompson used (what else?) his brute strength to take down, bloody, and TKO Kevin Asplund.
– Former TUF winner Kendall Grove looked great in his bout, busting a three-fight losing streak with a TKO win over the highly-regarded Englishman Danny Mitchell. Mitchell held his own, but in the end, it was a big win for Grove.
– Andre Winner withstood a very game Drew Fickett, who showed up in great shape and attacked relentlessly. It was a close fight, but Winner stood tall at the end. Great bout.
– Bobby Lashley did what he said he planned to do, which was go in, take Matthew Larson down, and submit him. In the process, he pulled off a highlight-reel body-lock slam (see pic below). Solid victory for the former WWE star.

GWC Promoter Robert Beené said, “I couldn’t be prouder of our GWC athletes tonight. They put on such a great show…I can’t wait to see them fight again. What an exciting night.”

Below are the full results of “British Invasion: