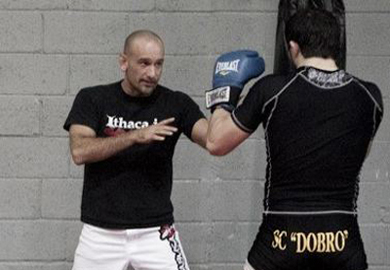 As a winner of multiple awards including “Best Gym of the Year” in 2009 and “Coach of the Year” in 2010, Greg Jackson has the track record to back those awards up. He has led the likes of Donald Cerrone, Shane Carwin, Clay Guida, and Jon Jones to success in promotions like WEC and UFC with a few of them even stumbling upon championship gold on the way. However, he is in quite the situation if everything works out the way it is planned.

Georges St. Pierre has been on the sidelines for an ACL injury to his right knee and a return date has yet to be announced. Shortly after the announcement of the injury it was confirmed that fellow Jackson MMA fighter Carlos Condit would step in to fight St. Pierre’s original opponent Nick Diaz in an interim title fight. Condit won the bout by unanimous decision and announced that he would not be fighting again until St. Pierre was 100% so they could unify the titles.

While on HDNet’s “Inside MMA” program, Greg Jackson stated that he will not corner either fighter if they actually do fight.

“Well, Georges is — he’s so smart, and is an incredibly attentive person. He really pays attention to whatever he’s supposed to do for his rehab. He approaches it very scientifically, and Firas Zahabi and everybody up there at Tri-Star, they make sure that he does the right things to eat healthy… If he ends up fighting Carlos, I will be stepping out. I won’t be cornering either person, and I’ll be enjoying a hamburger somewhere when it happens.”