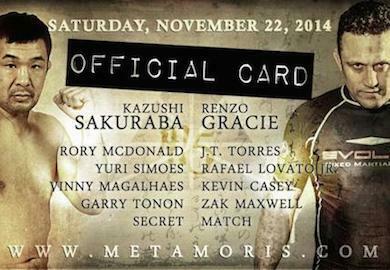 Metamoris 5 is set for October 10 and the event’s headliner has just been announced.

Ralek Gracie sent out the following, via press-release:

I am very excited to present Metamoris 5: Sakuraba vs. Gracie. This event honors the rivalry between Brazil and Japan; beginning in Vale Tudo and now on the biggest stage for submission grappling. So many MMA fans were inspired by the Gracie Hunter with his calm demeanor and his impeccable grappling skills. Renzo Gracie shocked the world by not tapping out in their last battle, resulting in a broken arm. This match is long overdue, and is Renzo’s final chance for redemption.

A limited number of tickets to the live event at the Long Beach Convention Center will be available on October 10th (12pm PST) exclusively through Metamoris.com. For more information click here.

Again, every stream counts so don’t be a pirate.