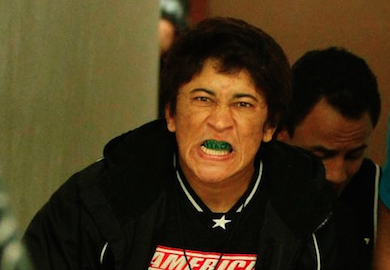 Invicta FC Contender, and fellow female fighter Ediane Gomes (pictured) recently told the Brazilian media what she thinks of the UFC women, and it wasn’t nice.

“The (female) fighters in the UFC are more worried about showing their a**es than actually fighting. MMA has become a new thing because of Ronda, but she’s actually one of the few real fighters. To be in the UFC, you have to show your a**. They should just put some strippers to brawl in there, it would be better.”

“Ronda deserves to be where she is now. I don’t see any fighter to beat her. The only one that could give her some trouble is Amanda Nunes. Nobody else can take her title,” Gomes said. “She’s good in what she does. The others are terrible. A bunch of cans. I say this and I’m not ashamed of it. It’s ridiculous. I dream about fighting in the UFC to show the other fighters that they need to train more. Miesha is good, but she should stay as a model so she can make more money.”