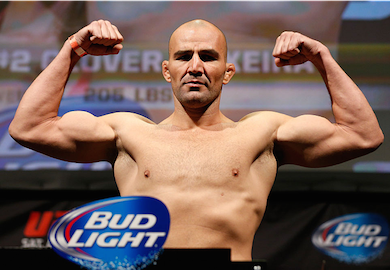 Glover Teixeira is gearing up for his fight against Phil Davis at UFC 179 in Brazil. Glover is coming off a brutal 5-round beating at the hands of light heavyweight champion Jon Jones, and a win over Davis would certainly help Teixeira get back in title contention.

Phil Davis on the other hand is coming off a decision loss to Anthony Johnson at UFC 172, prior to that ‘Mr Wonderful’ was riding a 3-fight win streak that saw him defeat Wagner Prado, Vinny Magalhaes, and Lyoto Machida.

Glover spoke to media members in Rio De Janeiro about the fight saying:

“I’m going for the finish. It won’t be a close fight. I thought Lyoto won his fight against Phil Davis (at UFC 163), but I didn’t protest because it was a close bout, either could win. I’m going to prove that I won, and I challenge the judge to rob me. It won’t go the distance, but I’d love to see how the judges would give him the win after I clearly win all three rounds, beating his face. They can put his father there as a judge and it won’t help.”

“Phil Davis is at the top for a long time, he’s a tough guy, so he’s another step in the division. I don’t think about Davis, (Daniel) Cormier or other top fighters. I want to fight and beat a top opponent, then fight another top opponent, and then fight for the belt again. This time, I will get that f—ing belt.”