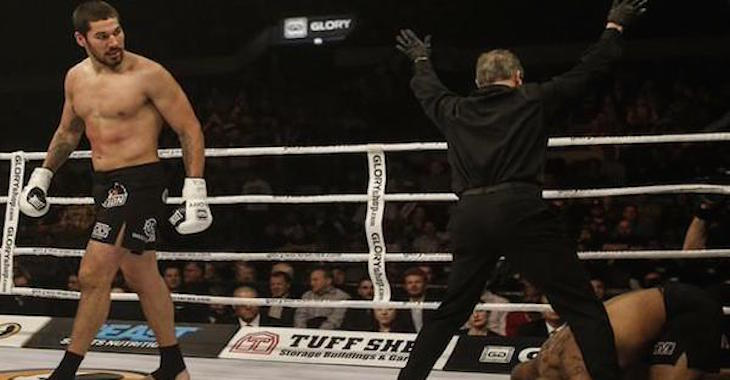 GLORY 21 took place in San Diego, California and was action packed with knockouts from start to… just before the finish. The middleweight championship bout was an anticlimactic clinch-fest, but luckily the heavyweights delivered in their one-night tournament that saw Xavier Vigney come out on top!

Championship bouts would usually be the highlight of the story, but Artem Levin and Simon Marcus did not perform to their maximum potential and the fight suffered because of it. What was supposed to be a kickboxing main-event played out like a muay-thai fight where there were clinches after every combination thrown.

Marcus was the aggressor, starting each interaction and landing more strikes than Levin. Levin suffered a point deduction for clinching too often which ultimately cost him the victory. While the commentators walked into the judges’ decision expecting Marcus to win the title, the fight was announced a draw and that’s where the controversy began.

Marcus exclaimed the decision was “bull ****” during his post-fight interview and stormed out of the ring. If there is a rematch between these two in the future, let’s hope it’s a little more entertaining.

Xavier Vigney came out on top of tonight’s four-man one-night heavyweight tournament with two dominant victories. Vigney gave his home-state crowd something to cheer for when he finished his semi-finals opponent Maurice Jackson in less than two minutes.

“X-Man” would go on to meet Chi Lewis-Parry in a more competitive bout. Lewis-Parry caught Vigney a couple times in the opening round, but Vigney continued to press forward and set up big strikes with devastating low kicks. In the second round, Vigney cracked Lewis-Parry with a right hand that had him staggering. Vigney was relentless in his attack and backed Lewis-Parry into the corner where he continued to fire off. The referee gave Lewis-Parry every chance he could to fight back, but he was forced to wave the fight off.

Currently ranked at #14 in the heavyweight rankings, these victories could boost him into a top-ten matchup in his next bout.