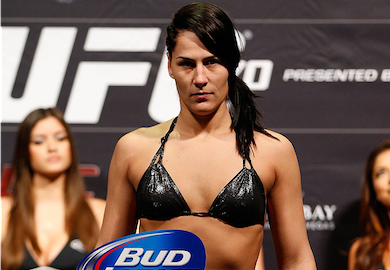 The two fought back at UFC 166 in an amazing back-and-forth fight that saw Eye the victory.

While disputed by many, Jessica was awarded a decision win via split-scorecards. However, she ended up failing her post-fight drug test for pot and the fight was ruled a no-contest.

.@MieshaTate @jisthrough2 interesting that this is what you respond to. You publicly call me out then seemingly run away

@mmasarah @jisthrough2 @MieshaTate you lack of class & your a has been champion who try to make herself relevant by start bullshit.

@mmasarah @jisthrough2 @MieshaTate it was a close fight accept it were I won. here at Least you won this. #soreloser pic.twitter.com/t0QdXVZJlS

When people hear Sarah Kaufman crying about losing to me .. We all go http://t.co/zLq7cwlSXm #whocare #youlost #eyewin