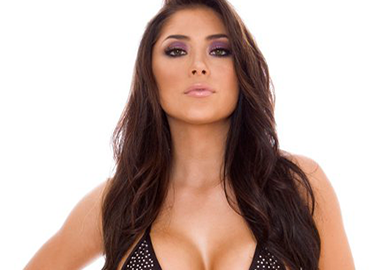 “I don’t really like the way she carries herself. I don’t think she’s a good role model for women. I think that women should empower each other and give each other a little pat on the back. I’ve personally been talked about by her, and I don’t even know her. I’ve met her twice. She said a couple things in her Maxim interview. A lot of people pointed it out to me, but I didn’t really acknowledge it. She’s paving the way for women’s MMA, and I’ve made being a UFC Octagon Girl into a career. She should definitely recognize that and be nice.”

The UFC’s leading ladies are  not friends and this quote (above) speaks volumes towards that fact!

Ronda being Ronda, hasn’t always been that nice to her co-working ring girls, as evidenced by the following statement she made in the aforementioned Maxim interview:

“…Like, ‘Ha-ha, it’s your job to show your titties—I do that better than you!’ Maybe next year. She’s only getting older, and I’m reaching my prime.”

Still though, Celeste, who likely wants no part of the UFC’s female champion, was as respectful as one might expect her to be following such a hurtful statement.

What say you Penn Nation?