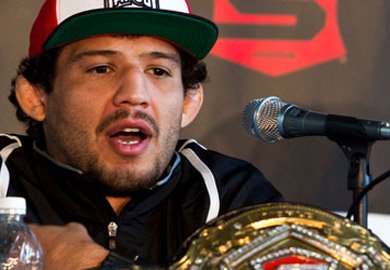 “I think I have the advantage in a couple of areas. I won’t go too much into detail. I’ve been in a lot of wars and I’ve been in a lot of battles. My chin has been tested and I like to test people’s chins as well. I’m a fighter. Maybe I wasn’t the most gifted athletically, but I’m a fighter who’s become an athlete. I think he’s an athlete who’s becoming a fighter. I think that’s the difference. He is very athletic, very mentally strong and very talented, but, I think I’m the scrapper in this thing and I’m going to make this a fight.”

Speaking with the Bleacher Report, Gilbert Melendez discusses this weekends fight against Benson Henderson in the UFC on FOX 7 main event.