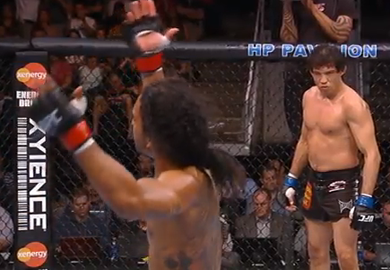 Two weeks ago, Gilbert Melendez and Benson Henderson squared off in a lightweight title fight in the main event of UFC on FOX 7.

The closely contested bout was back and forth and close to call, but much to the disappointment of onlookers, Benson Henderson was awarded a victory via a split-decision on the judges scorecards.

In a recent interview with MMAWeekly.com Gilbert Melendez weighed in on the controversial fight:

“He’s just a super athlete, and I expected that. He had some great kicks, but I also expected that. And I expected him to bounce in and land some punches and I did my best to counter the punches and block the kicks and I never felt like I was in any danger. I never felt any anxiety or that he was running away with the fight or he was putting it on me. I learned a lot from the experience. I learned that next time I fight him, I’d do a lot of things differently in there. I don’t want to give up my game plan, but I’ve gained confidence in the wrestling and grappling department. I didn’t think I shot too much. I didn’t want to engage him on the ground. I felt like he might have an advantage there but I think I know now that I feel a little more confident in those positions. In the clinch, I felt really strong there, attempted to re-clinch him. And I don’t want to get too in depth because I might fight the guy again, but I know exactly what I would do and how I would finish him. Not finish him, but to get my hands on him and fight him a little bit better. But at the time, I had my game plan, I stuck to it, and I thought it was enough.”