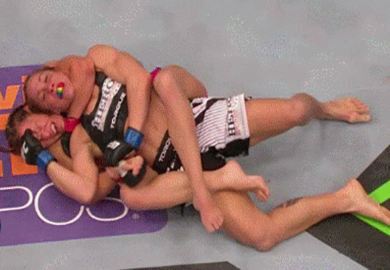 Liz Carmouche may have controlled the grappling game in the first round, but Miesha Tate adapted quickly and turned the tables in round three.

Miesha Tate almost finished the fight in the third round when she got the hooks in and slapped on the rear naked choke. Liz Carmouche had faced adversity before and refused to give up to this submission hold, so she tried her hardest to escape. Watch her peel Tate’s arm away from the choke attempt in the following .GIF provided by FanSided’s ZombieProphet!