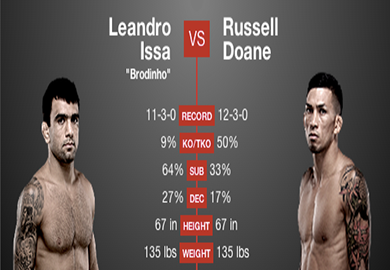 Russell Doane and Leandro Issa did the honors of kicking off the event with an exciting bout.

Doane did a good job neutrelizing Issa’s takedown attempts in the first round and kept his distance, but he ended up walking into a triangle choke attempt at the end of the round. Issa didn’t have the right psoitioning to finish the fight in the first round, so Doane  lived to see the second.

As fate would have it, the Hawaii native Russell Doane slapped on a triangle choke of his own that would go on to end the fight.

Thanks to ZombieProphet for the .gif!