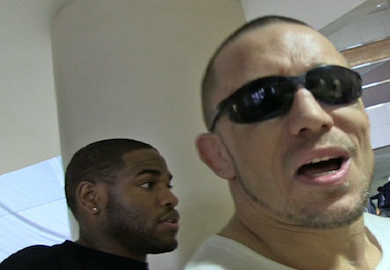 Is this the end?

Well fight fans, it appears we will all know one way or the other whether UFC welterweight champion, Georges St-Pierre, plans on retiring or not.

According to TVA Sports, Pierre will hold a press conference in Quebec on Friday (Dec. 13). It’s reported that the champ will address his plans for the future.

Ever since his controversial decision win over Johny Hendricks the internet has run rampant with rumors about what GSP was alluding to during his post fight octagon interview with Joe Rogan, where he said he needed some time off for personal reasons.

An unwanted child, deathly sick family member and major lawsuits have all been reported, then denied by the fighter himself. So what is it? At this point it’s any ones guess. Dana White has stated that he expects there to be an immediate rematch between Pierre and Hendricks, but it appears we will all know for sure if that will in fact be the case, or he might just come out and say that, he’s not impressed with your rumors. Get it? Sorry..

BJPENN.COM will keep you updated on the information as it comes in.