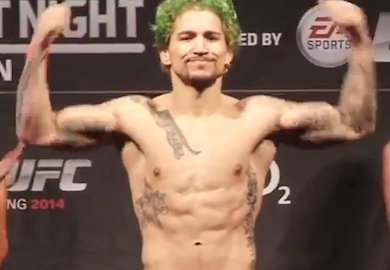 Louis Gaudinot is out of Saturday’s UFC Fight Night 54, leaving the UFC to seek a last minute replacement for the event.

MMAJunkie broke the news, which came from an inside source who spoke anonymously.

According to MMAJunkie, The UFC is currently seeking a North American replacement for the bout, which was scheduled to kick off the card on Fox Sports 1.

The bout would have served as Gaudinot’s return bout to the Octagon after testing positive for a banned substance back in March of this year.

Patrick Holohan, who is still on the card, but opponent-less, is coming off a 1st round submission win at UFC Dublin earlier this summer where he defeated Josh Sampo in front of his native Irish crowd. Holohan is a teammate of Conor McGregor and Gunnar Nelson at SBG Ireland, and has yet to lose in his 10 professional fights.

The lineup for the card is as follows: