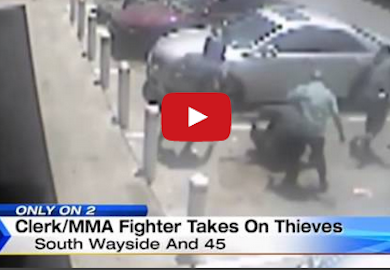 A southside convenience store clerk turned the tables on a pair of accused robbers on July 10 on South Wayside near Interstate 45.

“The first guy I saw, I just kicked him in the face. Then I punched the other guy. I just kicked him until he lays down on the floor,” he said. “Until he stopped moving cause I wasn’t sure if he had a knife or a gun so I wanted him to stop moving.”