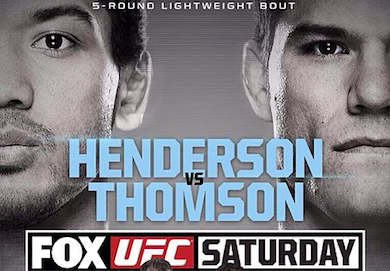 Betting on mixed martial arts is a tricky way to win money. There is no team to rely on when making a bet. It is easy to rely on top-notch players like Peyton Manning, Knowshon Moreno and Eric Decker to carry the Broncos to the Super Bowl. In the octagon, though? It’s a one man team, and there is always a chance that something unexpected could happen… like a fighter breaking his leg when his kick gets checked.

The age of “You just cannot bet against X or Y” is dead. Anderson Silva was defeated twice in a row by an underdog. Georges St. Pierre and Jon Jones were almost dethroned by heavy underdogs. When stumbling upon a gambling site and deciding who you are going to bet on, you must figure out if the odds are truly in your favor. Join me as I break down the main-event of this Saturday’s card.

Right off the bat, Josh Thomson sounds like the best way to make a profit; you would only have to bet $10 and you get double that if he wins. However, there are many things to take into consideration when pondering who is safe to bet on this Saturday night. Whenever someone is about to place a wager, they should approach it as if it is an open-book test. BJPENN.com news posts act as notes. Fighter quotes act as advice from the professor. It is downright silly to walk into an open-book test with no book. Why would anyone gamble without facts?

Josh Thomson was set to face Anthony Pettis for the UFC Lightweight Championship, but the champ had to pull out of the fight due to an injury. Thomson took a week off from training, got a call to fight Benson Henderson, then went right back into camp. The nine-month layoff between fights is not something to be concerned about, though. Whenever Thomson has taken at least nine-months off between fights, he has gone 4-1. Ring rust need-not cross your mind.

What should concern an interested underdog bettor is the fact that Thomson stated it was one of the worst camps in his career. Thomson stated he felt ‘unmotivated’ multiple times throughout his camp and confirmed that his normal training partners were not there with him due to the holidays.

On the in-octagon statistical side of analyzation, Ben Henderson has the reasonable advantage as well.

Both Henderson and Thomson are elite strikers in their weight-class. According to FightMetric, they are virtually identical when it comes to striking. Thomson may be a bit more accurate than his opponent, but Henderson’s southpaw* stance should balance that out.

Ben Henderson attempts a takedown almost every round. With a takedown success rate of 47%, he is likely to secure at least two takedowns in a five-round affair. Josh Thomson sports an impressive 55% takedown-defense rate, but that number could be skewed considering how many strikers he has fought in his career. In his last five fights with elite grapplers (Nate Diaz, Pat Healy, Tatsuya Kawajiri, Gilbert Melendez, Gesias Cavalcante), he was taken down 17 times. If we go back as far as 2006, he was taken down 11 times in a single fight against UFC veteran Clay Guida. Needless to say, Henderson taking Thomson down at least twice in this fight sounds like a safe bet.

Henderson DOES need to keep an eye on his limbs and neck as Thomson has won a number of fights by submitting his opponent off his back.

Taking these grappling facts into consideration may lead someone to think Thomson’s submission skills even out the ground game. Let’s do some extra digging so we can decide how true that is.

Josh Thomson has eight victories by way of submission holds (submissions due to strikes do not count). Of the eight opponents he forced to submit, they have a combined total of 111 losses throughout their careers. A whopping 52 of those losses came by way of submission. What that should tell a gambler is that Thomson’s submission victories, albeit impressive, look better as an unexplained number under a win column.

Throughout Ben Henderson’s 22 fight career, he has only been forced to submit twice.

It should be clear now that Henderson’s black-belt level grappling gives him the clear cut advantage on the ground. As an intelligent fighter, Henderson would not dare underestimate any opponent he is locked in the cage with. Expect Henderson to keep the fight standing unless he needs points. In which case, he will go for a takedown and work his way into a favorable position.

Looking to make a bet on a specific outcome? Let’s break down what we know:

– The striking game is too close to call.
– Josh Thomson likely will not be able to submit Bendo off his back.
– Bendo can, and likely will, land multiple takedowns throughout the fight.
– Bendo has won nine fights by submission, but Thomson has never been submitted.

Do you think those outcomes are right? Do you think Josh Thomson can walk away with a victory? Share your thoughts in the comment section below!

Author Note: The southpaw advantage is real. Check out ‘FightNomics’ by Reed Kuhn for more information.