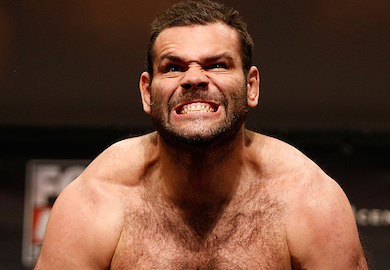 Former UFC heavyweight title challenger Gabriel Gonzaga will return to the octagon this Saturday night when he faces Matt Mitrione on the main card of UFC on FOX 13.

The fight will mark “Napao’s” first in bout in 11 months, as the Brazilian heavyweight had been sidelined by a nasty broken hand which required two surgeries to correct.

“My recovery was great. I had two surgeries and my hand is 100 percent,” Gonzaga told MMAFighting.com. “I trained hard for this fight. I did everything the doctor told me to do, and I had no problems getting back at 100 percent.”

Now healthy, Gonzaga is hoping for one last run at the UFC’s coveted heavyweight title:

“I trained hard to go there and finish the fight,” Gonzaga said. “I believe that this win will put me back at the top 10,” Gonzaga said. “I still have a few more years in me, and I’m training to earn another shot at the UFC title.”

Do you think Gonzaga is capable of making one last run at the title or are his best days behind him? Sound off Penn Nation!