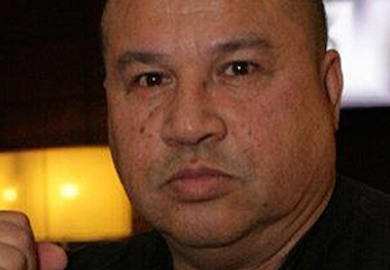 Fundafighter, the number one crowdsourcing destination in mixed martial arts, today announced it has launched a profile to support and help raise funds for of one of the most beloved trainers in combat sports, “Muay Thai Masta” Peter Sisomphou.

One of the top trainers in Muay Thai, his experience and expertise is legendary in Thailand and in the combat sports circles in Canada and America. “Muay Thai Masta” Peter has fostered the careers of Conrad Pla, Firas Zahabi, John “The Bull” Makdessi, Yves “Tiger” Jabouin, Alex Garcia, and David “The Crow” Loiseau, among others. His teaching style goes way beyond the rigors of technique. He serves as a friend, mentor and often father figure for his rising and established athletes.

In April of this year, Peter suffered a heart attack that required immediate emergency quadruple bypass surgery. His heart was functioning at only 15 percent, but following superior medical attention and treatment, coupled with his strong will, he is on his way to recovery. Since he cannot return to active coaching, and an active income, until he has fully recovered, the martial arts and mixed martial arts community has rallied around their “Muay Thai Masta” and donated their time to raise funds to supplement his income.

“We consider Muay Thai Masta Peter family here at Fundafighter and we will do anything to help him,” said Greg Hoffman, co-founder of Fundafighter. “We were honored to create his profile on Fundafighter and do our part in getting the word out to the Muay Thai and mixed martial arts community that Masta Peter is in need of support following his recent medical emergency. We wish Peter a speedy recovery and encourage everyone in the combat sports community to do the same.”

With traditional sponsorship and endorsement deals still young and evolving, even despite the global growth and popularity of the sport of MMA, Robert Stein created Fundafighter in 2012 with the vision of building an alternative revenue source for MMA athletes.

“I created Fundafighter as a way for MMA fighters and fans to connect with each other and to build a brand new revenue source for fighters,” said Stein. “Through Fundafighter, the premier MMA crowdsourcing platform, fans can invest in their favorite fighters and share in their success.”

Fundafighter  is an easy to use online platform where fighters can connect directly with millions of MMA fans around the world while raising money to support their projects. The Fundafighter team provides the destination, and builds a professional, customized crowdsourcing page complete with video narratives, photos and detailed descriptions of the fighter’s goals. In exchange for pledges, fighters offer fans a range of rewards and prizes including exclusive memorabilia and one-of-a-kind experiences.