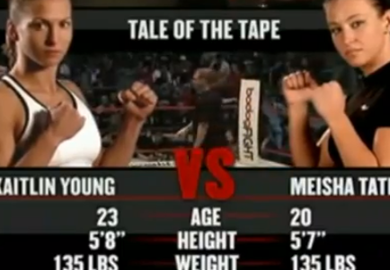 Miesha Tate’s Pro Debut was part of the HOOKnSHOOT: Bodog Fight Women’s Tournament which took place on November 24, 2007. Following a controversial decision win over Jan Finney, Miesha was KO’d at :30 sec of the 1st round by a vicious round kick to the face from eventual tournament champion Kaitlin Young. Miesha Tate faces Ronda Rousey on Mar 3rd, 2012 for the Strikeforce Bantamweight (135lb) Championship.