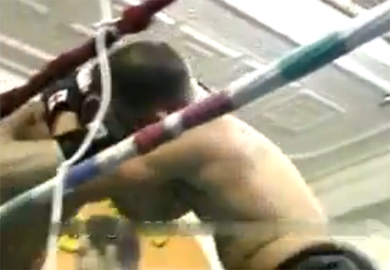 While the video tells one tale of a fight, Jim Genia, author of Raw Combat: The Underground World of Mixed Martial Arts, gives some details:

Frankie Edgar vs. Erik Uresk. Underground Combat League, July 10, 2005. Venue was an old boxing gym in the Bronx. Frankie was the heavy underdog, and though he won, broke a bone in his face (either from headbutting Erik or getting kneed in the face).

For his second fight with Frankie, BJ Penn actually brought in Erik Uresk to train with.