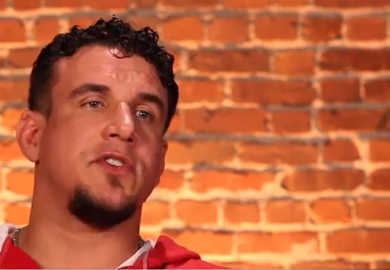 “Like I said a couple of times before, if I was losing to the number twenty guy that just got into the UFC and he’s had four fights and you know, after he beats me, he can’t win another fight, that would weigh on me. It’d be like ‘wow, I can’t even beat that level of competition’. But to lose to the Junior dos Santos’ and Daniel Cormiers, and to be facing Alistair in all main event or co-main event fights…I’m fighting tough guys. Guy that, if I fought them again, it could go the other way. It’s just that I’ve had a bad combination of three fights put together that could be losses on most people’s records. It just so happens that I fought those three guys back-to-back.”

“When people bring it up I do, but I honestly don’t sit there and dwell on it like, ‘Aw man, I wish Brock was back here’. His doll, we have a commemorative doll, he and I, my wife put it in the game room with different memorabilia. So I sit there and look at it all the time, but I don’t get the burning ‘I gotta get this guy’. I don’t have that personality where I just hold onto things like that. But when people ask me if I want to fight him, I say ‘yeah I’d love to.’ If it’s there, I’m going to take advantage of it. If it’s not, I’m not going to worry.”