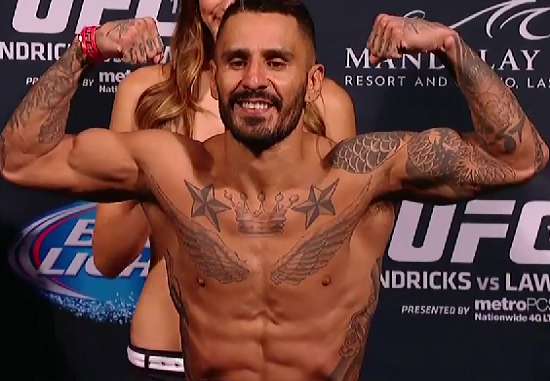 Last night, in the main event of the preliminary card of UFC 181, Francisco Rivera was submitted by Urijah Faber in the second round via rear naked choke. Prior to the choke, Rivera was poked in the eye, which many say lead to the loss.

“When I felt it, I covered myself. I was trying to tell the ref: ‘My eye! My eye!’ I felt Faber hitting me. I couldn’t see. He was on my left side and I couldn’t see out of my left eye.”

“I don’t know what the hell happened. It felt like all his fingers were in my eyes. That’s how bad it is.”

It was determined after the fight that Rivera has a laceration (cut) inside his eye, and remained in excruciating pain throughout the night.

“Everybody is making a big deal about how many [submissions] he has. It sucks for me. It’s not like he dropped me and subbed me. He really, really poked my eye. Accidental or not, what am I supposed to do, fight with my eyes closed?”

Rivera explained that he spoke with his manager, Jason House, and has decided to appeal the loss with the NSAC, and has asked the UFC for a rematch.