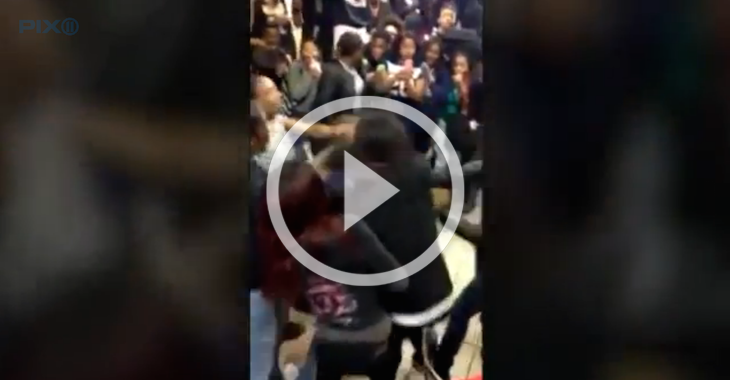 NEW YORK — Cell phone video shows a 15-year-old girl being beaten to the ground by 4 other teens inside a Brooklyn McDonald’s as dozens watched and cheered.

The savage fight broke out inside a McDonald’s on Flatbush Avenue near Erasmus Hall High School Monday afternoon, WPIX reported. The girl in blue swings at one of the teens but is soon outnumbered by her target’s friends.

The four teenagers relentlessly pummel the girl, who continues trying to throw punches.

She is eventually thrown to the ground, and the girls kick and stomp on her head and call her “b****”, as dozens of rowdy teens egg the girls on and do nothing to stop the attack. The victim is left cowering under a table, and is carried by fellow teens and placed on a bench.

“The tenacity of placing something on video to shoot a young lady being beat down by six or seven young women is ludicrous in our community,” said community activist Tony Herbert.

The victim suffered two black eyes and bruises to her head, police sources said. They’ve reviewed the video with officials at the high school but say the victim and her family have yet to file a complaint.

“The message has to be sent very clearly, that this kind of violence will not be tolerated whether in a mall or in restaurants and those involved should turn themselves in to authorities immediately,” he said.

The owner of the franchise, Paul Goodman, said in a statement:

“The safety of my employees and customers is my top priority. In keeping with my restaurant policy, my employees contacted the police at the onset of this situation. As part of the Flatbush community, I will continue to work with the NYPD and community leaders to ensure the safety of customers. Since this is now a under police investigation it would be inappropriate for me to comment further.”

There was an increased police presence outside the McDonald’s Wednesday.