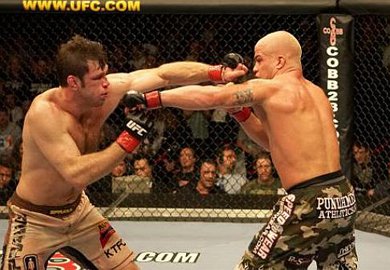 Earlier in June, Forrest Griffin mentioned that he would retire from life if he loses to Tito Ortiz in their rubber-match. Always one to joke, Griffin is also known for being very “matter of fact”, giving blunt and honest answers. In a recent interview with ESPN, Griffin addressed how much longer he sees himself fighting at a top-level for and how he wants to go.

ESPN.com: Everybody is talking about his future, what’s yours? How much longer you plan on doing this?

Griffin: I don’t know. It’s not going to be a long time. I don’t foresee the huge comeback. I worked out with that (Alexander) Gustafsson kid. Young guys, man. I’m old now. I like what Rich Franklin has done, there’s still a lot of guys I can beat — but I don’t know how many of those guys are in the Top 10. I’m still, I’d say, one of the Top 25 guys in the world at 205 pounds; problem is I keep fighting the top 5-to-10 guys in the world.

Forrest Griffin and Tito Ortiz will be meeting in the octagon for the final time at UFC 148 on July 7, 2012 in Las Vegas, Nevada. The bout is the third between the two with each fighter holding a victory over the other. This is also being labeled as Tito Ortiz’s retirement fight.