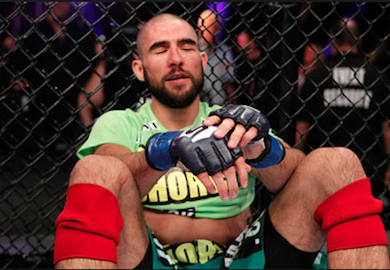 The 10th Planet Jiu Jitsu fighter never made it that big, having gone just 1-3 during his time under the ZUFFA owned Strikeforce banner.

Conor wasn’t one of the many fighters who got picked up by the UFC when ZUFFA shutdown Strikeforce, but as a ZUFFA contracted fighter he was still covered under their insurance plan.

In a recent story, covered by MMAWeekly.com, Heun detailed his difficulties with medical bills.

“I had torn labrums and I had what’s called an avulsion fracture, where my hip flexor was too tight so it pulled part of the pelvis where it attaches, it pulled like a chunk of the bone off. So the doctor went in and said well we’ll repair the labrum, but here on the right side you’ve got a mild case of hip dysplasia and it predisposes you to hip injuries, you know having the labrums tear when you’re grappling. So the left side it tore but he said it doesn’t look like it’s going to be susceptible to re-injury,” Heun explained.

“The plan was go to in on the right side, they were going to repair the labrum, and do some stuff in there and then do this PAO (Periacetabular Osteotomy) where they basically change the way the femur fits in the pelvis to avoid contact between the ball of the femur and the labrum moving forward with martial arts.”

Knowing that he was getting his injuries fixed once and for all made Heun a happy man, but it didn’t take long for a dark cloud to once again circle overhead when he found out that Zuffa’s medical insurance would not cover the preventative surgery.

“The problem is the UFC’s insurance basically said that doing the PAO was to prevent a future injury or was based on a pre-existing condition, and that wasn’t necessary. Of course they don’t tell the doctor that before he does the surgery because he could have just gone in and repaired the labrum, and when it tears the next fight we’ll repair it again,” said Heun.