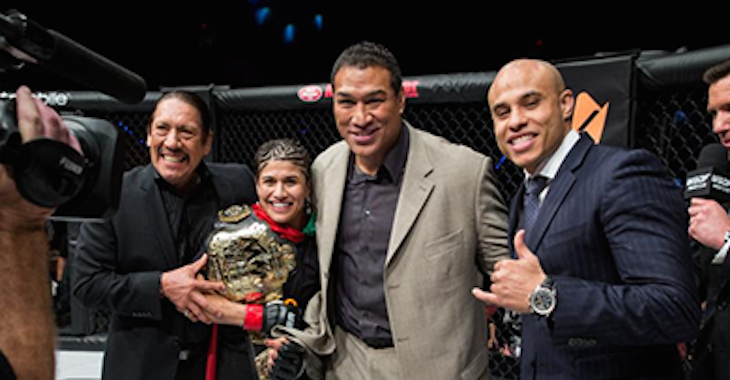 Former World Series of Fighting Strawweight Champion Jessica Aguilar will have her opportunity to prove her mettle when she steps into the octagon with Claudia Gadelha at UFC 190. The fight is set to take place in Brazil in August, and Aguilar thinks it could be a possible number-one contender’s bout.

Aguilar is certainly the most dominant women’s strawweight fighter outside of the Zuffa brand. She is currently riding a nine fight win streak and could extend it to double digits when she faces Gadelha.

“I do think that this is a contender fight and I am so pumped and excited about it,” Aguilar told the MMAHour. “They have not [told me that], but things can happen,” she continued. “They said it can happen if I go out there and do what I need to do and show my skills and then it might happen. But depending on what happens with Joanna and Jessica in a week, anything can happen and we’ll just go from there.”

Gadelha is coming off a loss against “Joanna Champion”, but she was undefeated before that at 12-0. The argument could be made that either woman can earn a championship shot with a dominant performance at UFC 190. Who do you think will walk out on top? Will she have a shot at dethroning Joanna Jedrzejczyk? Share your thoughts in the comment section below!