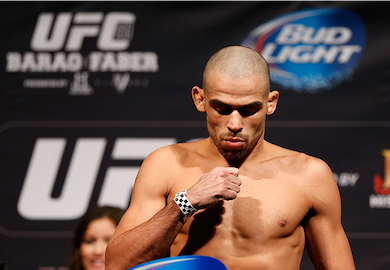 “The title is coming back to Brazil. I’m hungry to get this title back. I will get what is mine. I remember everything that happened until that point (that he got dropped int he first round). After (that punch), I only woke up in the locker room. The fight was really close in the beginning, but everything changed after that punch.

“T.J. can say anything he wants, but he’s not the one who makes the decisions. UFC makes the calls. The UFC gave me this opportunity, so I’m happy. T.J. is completely wrong.”

Former UFC bantamweight champion Renan Barao tells MMAFighitng.com that he’s hungrier than ever for his rematch against TJ Dillashaw.

The two will fight in the main event of UFC 177 in Sacramento, California.