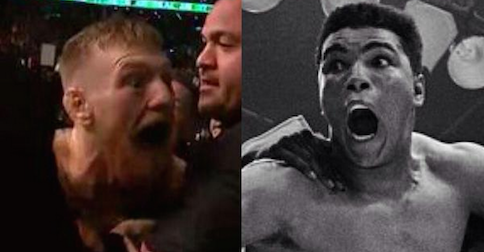 .. That would be really popular. The actual Ali is arguably the biggest sports star ever despite being an African-American who flew in the face of approval rather than courting it when he refused induction into the Armed Services.

Well, it would make McGregor really popular if it was true.

Passionate as UFC fans are, they’re not numerous. TV ratings have levelled at less than hoped-for levels in the third year of the Fox deal. Sunday’s card drew 13,828, the most of this season’s three UFC events in the TD Garden where the Celtics, the No. 12 team in the NBA’s Eastern Conference, have averaged 17,436 for 22 home games.

There’s one reason that Fox now shamelessly hypes McGregor: As sports properties go, UFC is just about as inexpensive as it gets.

I’m not making judgements about mixed martial arts; on the UFC’s competiton (sic) or lack thereof with the other MMA league, WWE; or with boxing. Now that the networks are no longer freezing MMA out and UFC has a mainstream promoter boosting it during its NFL telecasts, I wondered where it fit in the grand scheme of things.