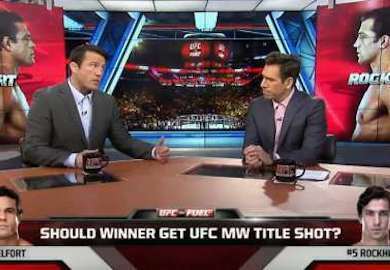 This weekend on pay-per-view, Demetrious ‘Mighty Mouse’ Johnson returns to action to defend his title against the flyweight number one contender, Ali Bagautinov.

During last night’s edition of ‘UFC Tonight’ on FOX Sports 1, the show’s hosts broke down the fight.

Here’s what they said:

Sonnen on Ali Bagautinov and his title challenge at UFC 174: “I cannot say enough good things about the Russian fighters, they are durable, they’re tough, they’re tacticians and they’re smart. I do think he’ll have a speed disadvantage and possibly a conditioning problem against DJ in a five-round fight.”

UFC TONIGHT’s Kenny Florian on Bagautinov: “I think he has the power advantage and the wrestling advantage. The key is can he cut off the cage against the speedy Demetrious Johnson? Can he slow down the champion?”

Sonnen on Johnson’s skills: “DJ really surprised me when he took on Moraga and he put on a wrestling display. I think he can wrestle with this guy. I don’t think Bagautinov will put him in the corner and be able to drop down to his legs. His defense can beat Ali’s offense.”