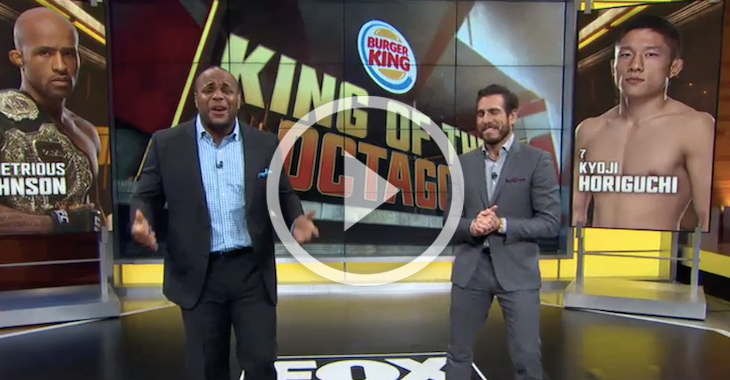 The UFC Tonight crew makes their predictions for UFC 186.

UFC 186 is fast approaching and it is headlined by “Mighty Mouse” Demetrious Johnson defending his flyweight championship against Kyoji Horiguchi.

Horiguchi isn’t even ranked in the top five and he is getting a shot at the UFC Flyweight Championship; Daniel Cormier and Kenny Florian break down his chances of dethroning the king in the video above.

Kenny Florian on the title fight between Demetrious Johnson and Kyoji Horiguchi: “Kyoji won’t be intimidated by Demetrious. He has great footwork and striking. But Demetrious Johnson has so many weapons. Horiguchi has to find a way to take away some of those weapons that Demetrious has to have a chance in this fight.”

UFC TONIGHT Host Daniel Cormier on Demetrious Johnson’s skills: “DJ does everything unbelievably well. He wrestles, he strikes and he’s one of the most well rounded fighters in the UFC. Horiguchi has done a great job in his fights using great combinations against his opponents and he gets his hands on them. But he has his hands full with Demetrious.”

Florian on Johnson’s keys to victory: “He needs to vary the attack. He needs to use his footwork – I think it’s the best in the UFC. He needs to land the takedowns and really mix it up as he always does.”

Cormier on Horiguchi’s keys to victory: “For Kyoji Horiguchi, he has great striking. He’s a very good wrestler and he understands positions. He needs to strike first. He needs to make it a brawl, just get his hand on DJ, and he needs to defend the takedowns.”