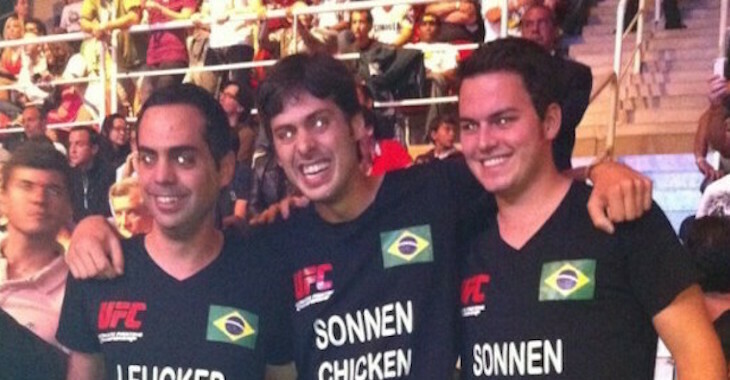 Let’s take a trip down memory lane. Back to when Anderson Silva was still king and Chael Sonnen was hated by most of the Brazilian fans.

Although, these Brazilian fans had sort of a weird way of showing their hatred for the OG. Ok, the guy in the middle, cool, ‘Sonnen chicken’ that’s clever. Guy on the right, ‘Sonnen Cagão’ (which Google Trasnlate told me means ‘Yellow-livered’), also, good use of your native tongue. Then, oh then, we have the guy on the left. ‘I F*cked Sonnen Last Night’………I’ve got nothing.

Did you guys ever see this back then? I’m surprised there’s not a whole website dedicated to selling these shirts.

MMA fans, no matter where you go, are the strangest and most ridiculous fans……that’s why they’re the best.