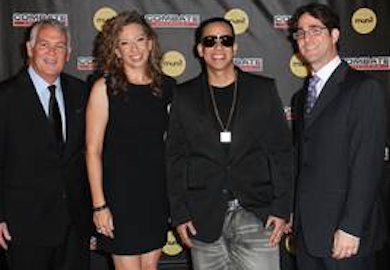 “mun2 is excited to continue to offer our viewers a look inside the sport of MMA,” said Diana Mogollon, Executive Vice President & General Manager, mun2. “No one has followed the world of Hispanic fighters through the process of making it into an MMA franchise, and we’re proud to be the first with this series from BMP Latin and Combate Americas. It’s an exciting series, with amazing stories of the challenges, struggle and victories that each fighter has endured to make it into la Jaula (the Cage).”

“Mixed Martial Arts is wildly popular with Latino audiences. Through our partnership with Combate Americas, we will give viewers an honest behind-the-scenes look at what it really takes to become the best. These fighters sacrifice everything for their sport, and we will be with them every step of the way,” said Gil Goldschein, President of Bunim/Murray Productions.

“Combate Americas is the most exciting addition to MMA since the beginnings of the UFC 20 years ago. It was specifically created to present the best new Hispanic fighters and to introduce a whole new audience to this highly entertaining sport,” said Campbell McLaren, CEO of Combate Americas.